The sophisticated art of pulse diagnosis

While in western medicine the feeling of the pulse is more or less a daily routine check for everybody, in TCM this method stands for far more. It is part of the so-called “Palpation Examination”, a special form of pressing certain body areas to check out if any pathological changes took place. A distinctive empathy is required to interpret the patient’s pulse as well as a deep knowledge to differ between the 28 individual pulse types. 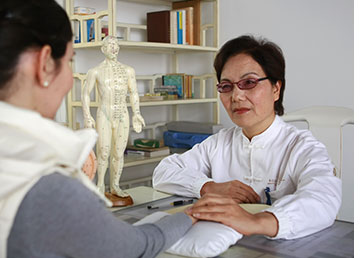 Feeling and finding someone’s pulse might sound easy but in TCM, doctors are following specific instructions for examining the patient and diagnosing his/her condition. In TCM, it is believed that the pulse is the palace of blood, governed by heart and commanded by Qi (vital energy). Every single disharmony in the human body leaves its imprints on the pulse.

The pulse will be taken on both wrists directly at the radial artery while the palms are facing upward. Doctors place their index, middle and ring fingers on the patient’s wrists in such a way that fingers correspond to specific organs. The index finger is the first position, known as chu. It symbolizes the heart on the left hand and the lungs on the right. Second position, also called guan, is the middle finger, sinisterly standing for the liver and dextrally for spleen/stomach. The third and last position chi, felt with the ring finger, illustrates the kidneys, one Yin (left) and one Yang (right), also seen as the vital gate of the body.

It takes at least 50 pulse counts to identify the right type, analyzing the terms of depth, speed, strength, shape, length and rhythm. Additionally the doctor differs between three levels of pressure. Directly underneath the skin is the superficial level for all exogenous pathogens. The middle section represents the current state of Qi and the deep level, next to the bone, mirrors the internal condition of health. With a rising pressure it is possible to feel and survey each level.

A normal pulse is taken best in the early morning because the body is in a relaxed state. Felt on the middle level, it’s supposed to be quite smooth, even and forceful with around four beats per breath. Variations of the pulse depend on age, sex, body constitution, emotional state or climatic changes. The men’s pulse, for example, is often stronger and easier to feel on the left wrist whilst it’s generally easier to feel a woman’s pulse on the right wrist. Also, seasons can influence the pulse: because of the cold weather, the pulse tends to be felt at a deep level during the winter, whereas it can be felt at a more superficial level during summer.

Let’s illustrate with three common pulses: “Thin”, “Rapid” or “Intermittent”. A so-called “Thin Pulse” is defined through a very fine but distinct beat in the middle level. It could point out a blood deficiency (which explains why the pulse is a bit weaker). A “Rapid Pulse” would correspond to more than five beats per breath and may be caused by inner heat (which would increase the blood flow). An “Intermittent Pulse” is characterized by the pulse skipping some beats by time. It could point at a serious disharmony or a warning signal of exhaustion, which would need to be addressed as soon as possible.

It takes extensive knowledge to fully understand the pulse diagnosis. Trust your TCM practitioner to precisely diagnose and identify yours in order to adequately address your condition.

When the tongue speaks for your body